It’s bad enough, when born this time of year, to be told “Oh I’d have got you a birthday present but I’ve got you a bigger Christmas present” by cheap skates hoping to pull the wool over already tried before eyes. But what’s worse, especially recently in the UK, is the chuffing post.

While all around me are putting up their Christmas cards in displays of social popularity I have to hold off opening cards I receive before my birthday, which, if you didn’t know, is today. A few years back I realised that when my birthday arrived I had fewer birthday cards to open on the actual day than my peers because I had opened mine by accident thinking “Oh it’s a Christmas card, it should be safe”. So recently I have taken to stock piling the cards received through the mail until the actual day and then I have a mass card opening ceremony. 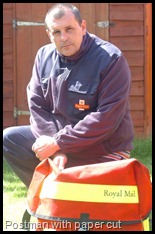 Last year the postie had a good excuse. Most of the UK and Warwickshire was under a thick blanket of snow and poor Postman Pat was at risk of slipping on the pavement. Meaning they would be having to take time off work with a sprained foot and a personal injury claim. Fair enough. This modern snow can be lethal. Those Victorian and postWW2-pre HSWA(1974) postmen had it easy. I’m surprised today’s postmen don’t have to wear special wire lined gloves in case they get a rather nasty infected paper cut from an overtly sharp envelope.

Last year’s snows and postage backlogs meant that I was getting birthday cards well into the New Year, which was nice. Amusing in a “Ne’r mind eh?” kind of way.

This year though, I thought it would be better. No snow in the midlands. Not a drop. Well at least in Leamington Spa at any rate. Through the week I had received a good few cards through the mail. I’d say about 9 or so. A few who’s origins I could guess and a few I could not. It was going to be a good birthday morning, opening these cards.

Just after my breakfast of Cinnamon Grahams and a cup of tea, I began the opening ceremony. One by one I gingerly teased each card out of it’s envelope revealing either ageist birthday mirth or greetings of seasonal persuasion.

The score was roughly

A nice balance. But no fear, I thought, it is Saturday today! The Royal Mail still deliver on a Saturday. Maybe I’ll get some in the post today!

Of course, sitting round expectantly is not something I can do these days, so we opted to brave the early morning cold and penultimate-Christmas-weekend  shoppers and grab a few things before we came home for the afternoon to see what exciting things were in line for the rest of the day.

All the while I was like “heheh I can’t wait to get home to the mountain of cards that will be awaiting me on my doorstep”.

It was the spirit that enabled me to battle through the shuffling horde of consumer zombies.

The vim that vigorously calmed my need to vent venom at gawping gormers goggling at festive gifts of grot.

The spice that added fire to my mental curry of warmth empowering me through the ice knife cold Warwickshire winds.

So you can imagine my face when I opened the front door with the eagerness of an expectant child on Christmas morning only to find….

there was for Fruitcake.

NOT A SINGLE ONE delivered today was for me. NOT ONE.