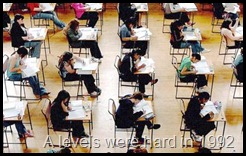 When I left compulsory education back in 1992 A levels were hard. I’m sure they are still hard but back in the day, they were hard. If more than 20 people at your school got A grade A level results fingers would have been pointed and investigations into cheating conducted.


At that time we were told about the various career options open to us. Either you stayed on after GCSE and did A levels with a view to getting a job afterwards or moving on to university. Or you left school, did an apprenticeship if you could find one or joined the armed forces. Because I was bright I was told that my future lay beyond university and that I should focus on what I wanted to do.


Difficulty was, I didn’t know what I wanted to do. To some extent I still don’t know what I want to do. So it frequently amuses me how it is universally accepted that 16-19 year olds should some how decide what career they want to pursue and make life changing decisions. 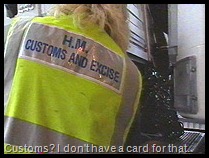 I left school with basic job search skills. I had several ideas what I wanted to do, mostly become a customs officer, but the careers department at school wasn’t all that clued up on careers that didn’t involve a pack of Happy Family cards. All well and good if you considered the police, the ambulance service, being a butcher or baker or an estate agent. However, woe betide any pupil set on a non-typical career such as Customs Officer.


It should be remembered that the Internet in those days was basic if not non-existent. There was no vast careers database available to people at home. You would have to attend at careers service offices who would shrug and tell you that there was no work and that you might as well give up and just sign on until something comes along you fancy. 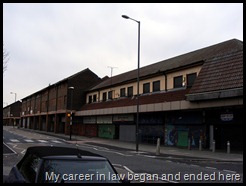 Over the years that followed, so did my career choice. Customs seemed like a nigh impossible career to break into, few vacancy adverts were placed in the local press and by 1995 my appetite for a career in Law had started to develop.
With a few months of experience in a law office I was convinced, mostly by the assurances of the adults around me, that getting an entry level job in a legal firm would be a breeze. Home printers were few and far between in those days. So all applications would have to be hand written and all vacancies sourced through either the job centre or through the local press.


Bored of life on the dole and constant rejection letters (yes, in those days companies replied to you even if it was just with a “no thanks”) I attempted to make the move into a career in law by enrolling on the only suitable course I could find in the area. That being an ILEX course based at Southport college, more than 20 miles away from my home.

It ran one day a week. Every Thursday I would travel the distance on the train and return on the last night train to leave Southport. This I did until a month from the end of the course the Job Centre told me that they would not fund the following year and besides that they had an interview for me to attend, failure to attend said interview would result in cessation of benefits.


I attended, got the job and stayed in the post for about three and a half years.
Unfortunately, it was not what I wanted to do with my life. I wanted a career in Law. “Fear not” I was told “It’ll give you relevant experience”. Desperate to escape the daily humdrum of no hope of promotion and dead end job, I bailed at the first opportunity. Following the advice that it was best to remain in employment than to leave and look again.
That was a stupid thing to do.

The next 10 years involved working in ICT. I never wanted to be a computer technician. Fuck, I’ve never met anyone who works in ICT that set out to work in ICT. In those days, jobs in IT were easy to get into because few people had the qualifications or experience. Thing was, every day I spent in ICT meant that I was limiting my future prospects to that of ICT related careers. Recruitment agencies would only offer call centre work. Applications for career changes would go without response. Those that did said “No relevant experience” or “Insufficient qualifications”.


Aware that the job market was flooding with graduates with far less work experience than myself I plunged into a Journalism degree on the advice of a career consultant. I now find myself struggling to compete in a shrunken jobs market despite the assurances of my tutors that my worldly experience should make me more employable than my contemporaries. I am back working in ICT. For less than before.


I guess having a career plan  helps. Problem is I am reluctant to fix on one specific career choice. The avenues that lie before me mostly involve further study. Applications to entry level graduate careers receive “No relevant experience” and “inappropriate qualifications”, responses I believe are veiled “You’re too old” replies. And that’s only those firms polite enough to reply.

It’s hard not to think that I’m on some employment blacklist. Even recruitment agencies do not respond. Those that do give the usual “Nothing on our books as yet”. Firing off CV after CV into cyberspace results in nothing. All the time the clock is ticking. Unable to gain relevant experience because I have insufficient experience. I’m 36. I have experience. I can manage a team of administrators and teams of media students. I can type, use HTML, instruct, use computers, communicate via telephone, email and inter-personally. But no. Nobody wants me.


It’s plain to my sight that even when you take into account the lack of jobs out there, there must be something about my CV or work experience, that puts potential employers/HR departments off. Even my companion, who was recently made redundant, gets more recruitment agencies calling than I do.
I bet it’s cos I’m ginger.


Regardless, I am conscious of the approaching wave of 2011 graduates. The flood of students with “good” A levels (better grades than me!) up to and including 2015. The lack of industry and opportunity in the UK and the fact that each day I spend in ICT I am making myself more unemployable to my chosen career change.

Further machinations of a job seeker

Further to my last entry here I have managed to obtain a short contract of work. Hurrah! You might say. You might even assume that I am pleased. However, I’m not.

Four years ago I moved from Liverpool to Yorkshire. It was a necessary move and it held the prospect of stabilizing my three year old marriage which was facing difficulty. The job I left in Liverpool was well paid. £23k helpdesk technician. A job I wasn’t 100% happy in even though I had held the post since 2001. Prior to that I worked in a poorly paid civil servant post where my ambitions for career development were not being met.

At the time, there were few people with IT qualifications on the jobs market. I embraced the emerging technology with gusto and found I had a seemingly natural ability to grasp the complexities  of computer software and hardware and share my knowledge with others. It was easy in those days to get into IT roles. Hence being able to get the well paid helpdesk job.

Of course, not having anything much in the way of IT qualifications at a time when a growing number of people with IT qualifications were emerging onto the jobs market meant that well paid helpdesk jobs were few and far between. Indeed, when the move to Yorkshire became reality the only jobs recruitment agencies offered me were call centre orientated and the only job I could get on my own initiative was a very low paid one in IT at a sixth form college.

By this time I had become disillusioned with my career in IT. It seemed that all I did was wipe the bottoms of better paid people who, it appeared, should really have known better.

I sat in the office one day and contemplated my career. Which direction was I taking? I never really wanted to work in IT. I had just fallen into the career. All the jobs I saw that I could do required a degree and my lack of which seemed to be going against me. Thus, the sensible thing to do, it seemed, was to start again from scratch, get myself a degree in an area I was interested in and try, at the age of 36, to carve a new career for myself.

And so that is what I did. Only the problem was when I graduated this year, the journalism, writing and media world was completely and radically different to the world I was tempted into by poor careers advice and traditional thinking. Competition for graduate employment these days is high regardless of which subject you study. Attempting to break into a new industry as a mature student was never going to be easy and only made even more difficult by an unpredictable recession.

So back to the gist. Why am I unpleased about my new job? Simply put I have fallen back into the career I had so desperately attempted to escape. The shackles of experience heavy around my neck. Even though the position is only for four months and I have only been working there a week I already feel resentment and anger with the job, the world  and especially myself for being so desperate for work that I would prostitute myself back into my old industry sector, sullying my CV with even more IT related work instead of riding the storm and attempting to pepper my CV with experience relevant to the industry I want to enter.