When did you last use a public loo? Today? Last week? Last month?

I think my last visit to a public loo was when I went to Tenbury Wells with Z. 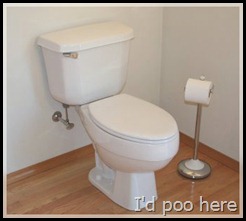 Usually, when caught short, I’ll try to sneak into a pub, pretend that I’m looking for someone and do my business there. Well...not in the pub lounge...more like in the pub’s bog. But you get my meaning. This, I must explain, is only for number ones. NEVER for number twos. And only recently, number ones in urinals.

You see, I have this dislike of public bogs; Dirty, smelly and dingy cathedrals of cess and unease. Or at least that is my experience of them. Every man that enters a public loo is potentially a murderer, a druggie or a rapist. Every drop of water on the floor a potential plague bearer and every surface the path to dysentery. 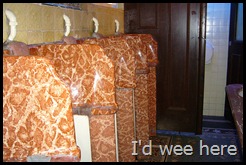 I suppose this began at primary school. School for me was in a Victorian building. Ageing. Falling apart at the seams. Paint peeling from the high vaulted ceilings. Wooden floors. Creepy corridors. That kind of thing. The toilets reflected a similar age. Buffed greenish brown stone urinals. The trough caked with strange solid matter and verdigris encrusted plumbing. The stalls contained low porcelain thrones that wouldn’t look out of place in a retro-furbished bathroom with rising chain operated flushers. One of the thrones was permanently blocked with matter that I care not to describe and the whole room had an odorous miasma of cheap bleach, urinary infections and damp staleness. 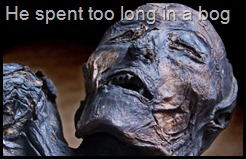 This was probably not the thing that kick-started my dislike of public toilets. I think it was the characters that tended to loiter in this palaces of piss stink. Mostly the bullies, the ne’er-do-wells and the feckless. You know the type, they probably grew up to be successful “business men” who peddle drugs and traffic women in their vast criminal empires or, they’re locked up in prison.

The toilets were always the last place I’d want to be. I had even been known to hold off from going to the toilet until I had returned home. Something I still kind of do. British public toilets nearly always remind me of those awful facilities at St Mary’s. Sometimes even the ones in the pubs do that too. It’s like people are not proud of toilets. They’re places that, left untended, seem to rapidly decline into dirty horrid holes. 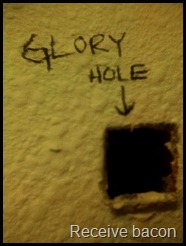 I’ve been in nightclub toilets where the floors were sodden with liquid. I’ve been to restaurants where I’ve refused to eat because of the condition of their toilet facilities. I’ve seen sights you would never believe in platform toilets on railway stations. Even abroad, I’ve used manned conveniences that I’ve paid to use where a swish of the mop wouldn’t have made the slightest difference in cleanliness.

Now, before anyone starts kicking off about how not all toilets are like that. Let me agree with you. Not all toilets that are for public usage are like that. I’ve been in pristine bogs. So clean they smell of roses. Clean enough to pass as a toilet in a private stately home. I’ve also been in adequate bogs that, though free to use, are manned by a maintenance person who spends time ensuring that any puddles of piss are swiftly mopped up. 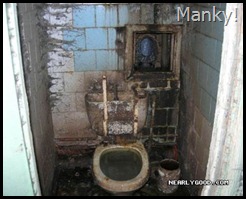 Then today, there came the news that a number of councils in the UK are selling off or closing their public lavs because they are no longer used or they have fallen in to disrepair. A look on the internet will uncover no end of tribute sites dedicated to the grand old public lavs that once graced UK townships. These days they are few and far between as councils cut back on budgets and sanitary services suffer. 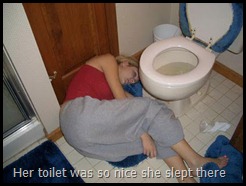 If I had the money I’d buy one. I’d refurbish the place and charge £1 to use it. I’d ensure that the place was light, airy, clean and safe for people to use without fear of a penis being stuck through a hole in the partition. Users would not have to worry about stepping into anything unpleasant and maybe even buy themselves a freshly made coffee on their way out. The attendant would be proud of their work and rewarded for such. Maybe even make it a members only place for an annual fee of say £20. Each stall would be cleaned by the attendant after each use. No fear of druggies or buggery.

Sadly I doubt I could raise the funds.